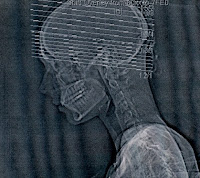 Today is my 8 Year Anniversary!


On October 8th at 2pm, something felt like it snapped in my neck, followed by shooting pains in my face and a seriously mean headache that felt like my brain was moving in my head every time I moved! This was a vessel bursting in my brain. Nothing could have prepared me for what was about to happen to me.

I was taken to hospital and lucky for me, they did not send me home with migraine tablets! Instead I was rushed to Charing Cross Hospital in an ambulance early the next morning where I would spend an extraordinary 11 days. I had head x-rays, an angiogram, a five hour coiling procedure which was unsuccessful (I would be the schmuck who had an unusual bleed) and that led me to having open brain surgery for 6 1/2 hours to save my life!

I have Doctor O' Neil (the only man alive to have actually seen inside my head), the lovely Roger, Marito and Shinead to name but a few to thank and all the crew on 11 West for making my life easier whilst saving it. For a squeamish person such as myself, I have been through more than you can imagine. Fear and pain beyond belief, I've had staples in my head! I almost died but I get to live on and continue performing and making music for you lovely people.

I am an extremely lucky girl!

What is a Subarachnoid Brain Haemorrhage?

A subarachnoid haemorrhage is a particular disaster because it's often fatal - as many as 30 per cent die within hours, and a further 50 per cent die within the first month - or result in serious disability. Among the survivors of brain aneurysms, the mental capacity of around half of them will be affected.
There's often little or no warning that a subarachnoid haemorrhage is about to occur. Typically, the person collapses with a sudden headache unlike any they've experienced before. They may vomit, develop signs of meningitis, such as neck stiffness and dislike of light, and may rapidly become drowsy, confused and unconscious. In milder cases, the illness may appear like a migraine or meningitis due to an infection, but in severe cases it's quickly apparent that something is seriously wrong.

Those who survive the initial episode are at great risk of another bleed unless action is taken. The standard treatment used to be surgery, which involves opening the skull and clipping off the faulty blood vessel. This operation, known as clipping, is usually done within days. However, although the operation puts an end to the risk, it carries a risk of damage (although this risk is far less than that of a second bleed.)

In recent years, a new technique has been developed as an alternative to clipping. In this technique, known as endovascular detachable-coil treatment or coiling, a detachable plantinum coil device is inserted into the blood vessels via a small cut in the skin (usually in the groin) and passed up into the brain under x-ray guidance to block off the faulty vessel. In 2005, a long-term follow-up study of patients treated with coiling showed that it's as effective as surgery, has a lower risk of complications and offers a greater chance of survival without disability. It's now the standard treatment for most aneurysms in most areas of the UK.

Recovery from any type of stroke tends to be slow. Intensive rehabilitation therapy, including physiotherapy, speech therapy and occupational therapy, are usually needed. Depression is a common problem after stroke, and good psychological and drug treatments are essential to help recovery.
After decades of being viewed as a fairly hopeless condition where only a little positive treatment could be done, new approaches are at last starting to make some impact on recovery rates from strokes. For example, researchers have shown for the first time in humans that rehabilitation therapy may help a stroke survivor's brain rewire itself, leading to regained use of a previously unused limb.