Began with a Bang!

Instead of making resolutions at the start of this year, I made extensive lists of all the things I want to do and achieve.
In the first week of this month, I threw myself into one thing I’ve always wanted to do but never attempted before… Aerial Acrobatics!
As if I don't already live life Ninja style... I'm doing the Hoop specifically. After the teacher told me at the Open Class I was a natural, I decided to do the full course and had my first lesson the next day. It's so hard!!! Basically I got home and EVERY muscle hurt something deadly plus I had no skin left on my hands and at the back of my knees but I am determined to be spectacular at it skin or no damn skin... :-D 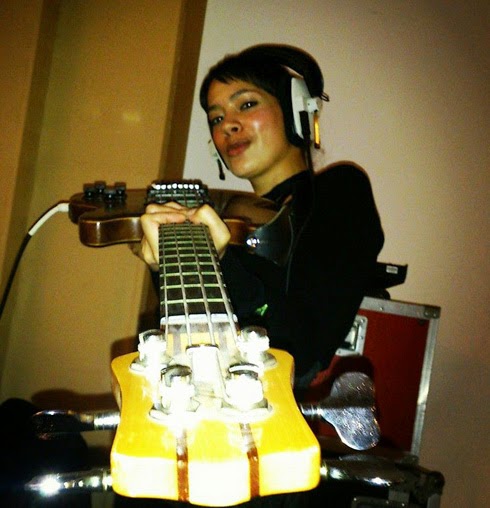 In the middle of January, I was lucky enough to record two songs on bass for David Ryder Prangley’s Birthday Suite with DRP and Robin Guy. It was an awesome day of recording. The two songs, plus one performed solo by David on the piano were streamed live that same evening for fans. The highlight for me was the moment David changed one of his lyrics to include my name into his song! Totally brilliant!

I’ve been incredibly inspired lately and not only have I come up with some excellent future business plans for Music Audio Stories, I was invited again to this year’s Kensington Olympia Toy Fair 2015 where I had one or two more new ideas! All will be revealed soon… I have also written two new stories this month, 'Billy Joins the Circus' and 'Weird & Wonderful'. I will be working on these stories next month. Both stories have catchy fun songs in them. I seem to be developing a skill at writing catchy children’s songs! My last audio book was described as an "insanely contagious music audio story"! :-)

In between all of that I found the time to see Wind in The Willows, Freud the Musical and the Terror & Wonder exhibition at The British Library where I brought two amazing books. What an awesome start to the year! If you haven’t already, make yourself a “Bucket List” as some people call them, with all of the things you want to be, do and have and then set about making them happen. This is food for your soul.