The Making of Lilygun's 2nd Album

I love my work for and with the kids but sometimes I love being a Rock Star too and I'm devoting my first two months of this year to all things Rock'n'Roll! I'm currently in the middle of recording Lilygun's 2nd album which is sooooooo exciting! 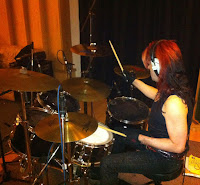 Recording the drums with Belle Star (Lilygun's drummer) was great. When you work with an awesome drummer like him, you can just sit there listening to drum tracks playing over and over and truly admire the art of great drumming :-) I can almost hear melodies when I listen to Belle's drumming!
Due to my weird number thing, I decided that this album will feature 8 songs, as our debut album did. We refer to these songs as "The Big 8".

As some of you know, in the last few years I have been playing bass in my friend's bands so now, I play the bass! As a guitarist, I could kind of play bass already although there are differences of course! However, nothing beats playing live on stage and recording with a band in terms of expanding ones abilities and confidence. After being on stage as a bass player, I thought it would be cool if I could play bass on one or two Lilygun songs. So I did! It was a lot of fun and I really enjoyed the recording sessions and now I can add 'Bass Player' to the list of things I can do! ;-)

I seem to be more open to ideas on this album than I was on the first one. Maybe that's because the songs on our debut album had already been performed countless times before we recorded them. The songs on this new album have never been played live before so we're shaping them as we go.

Two songs on the new Lilygun album feature piano. Piano is the first instrument I learned to play and one that I love. I began playing the piano at school to hide from the horrible girls in my class. I'm a self-taught pianist but I spent so much time alone in a tiny music cell at my school, that I became quite an accomplished pianist!

One of my first classical piano compositions met with the approval of Richard Blackford (the british TV, film, opera and Emmy Award nominated composer) and was chosen for a music competition to represent my school. I have never played in public again. As you already know, I am a composer. Many of my classical pieces feature the piano so it's an instrument that's natural for me to play.

Last week I moved on to guitars but I'll post another blog with photos on that soon.