Agent of Change Campaign: write to your local MP and Government Ministers to protect music venues.
I am passing this on to all of my followers as it's a topic I feel passionate about... 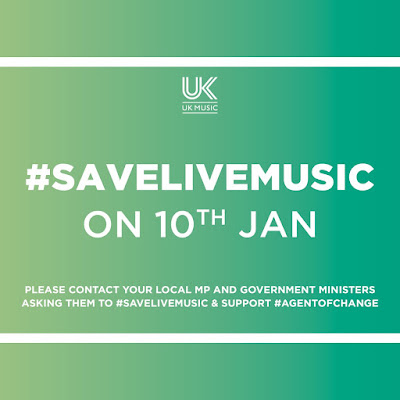 Alarmingly, around 35% of music venues across the country have closed in the past decade. Music venues play a vital role in supporting the industry’s ecosystem and ensuring a healthy music industry. They also play a key role in nurturing the talent of tomorrow.

A growth in demand for property in city and town centres has led to increasing rents and landlords deciding to sell property and land to developers. This has placed rising financial burdens on pre-existing operators of grassroots music venues, who are often situated in areas that are popular for redevelopment. It has made them vulnerable to a more liberalised planning system.

Former Government minister John Spellar MP is promoting new legislation in Parliament to protect music venues in the wake of this. The Planning (Agent of Change) Bill would place the agent of change principle to planning law on a statutory basis. “Agent of Change” means those bringing about a change take responsibility for its impact. The Bill has political momentum and has secured cross-party support. There is a very real prospect of that this proposal could become law, providing much-needed support to music venues in the process.

Mayor of London Sadiq Khan has committed to the principle in his London Plan. The Welsh Government are delivering on it. The Scottish Government are also looking into it. It is time for the UK Government to get behind the Bill and back the Planning (Agent of Change) Bill.

• Please write to your MP in support of these proposals and ask them to call on the Government to adopt the Planning (Agent of Change) Bill. To find out who your local MP is, click here.

• Please write to the following Government ministers and ask them to support the Planning (Agent of Change) Bill: