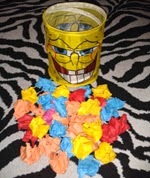 I am so proud to announce the release of my sixth Music Audio Story 'Litter Bugs' out today! It has been a huge hit at all the nurseries and schools I have visited. The children love it when I throw all the "rubbish" (little bits of colourful paper) everywhere and they have to pick it up and put it in the bin to the sound of the song in the story. Last week this kid made me crack up... He drew a road and a bin, so I said "that's wonderful but where's all the rubbish?". He raised his little eyebrows so high and said "it's in the bin!" and then I said "but where are all the bugs?" and he replied "they went home." hahaha it was so funny, even the teachers were laughing!

Bugsville was a lovely town full of neat little houses, tidy gardens and very clean streets. There was never any litter around thanks to The Bug Club! The Bug Club were a group of friends who kept the town in good order. Together they would sweep the streets and pick up any rubbish they saw lying around and put it in the bins. One day they noticed more and more litter in the streets and decided to investigate. The story includes an original classical soundtrack with a sweet little sing along song. Accompanied by unique sound effects throughout.